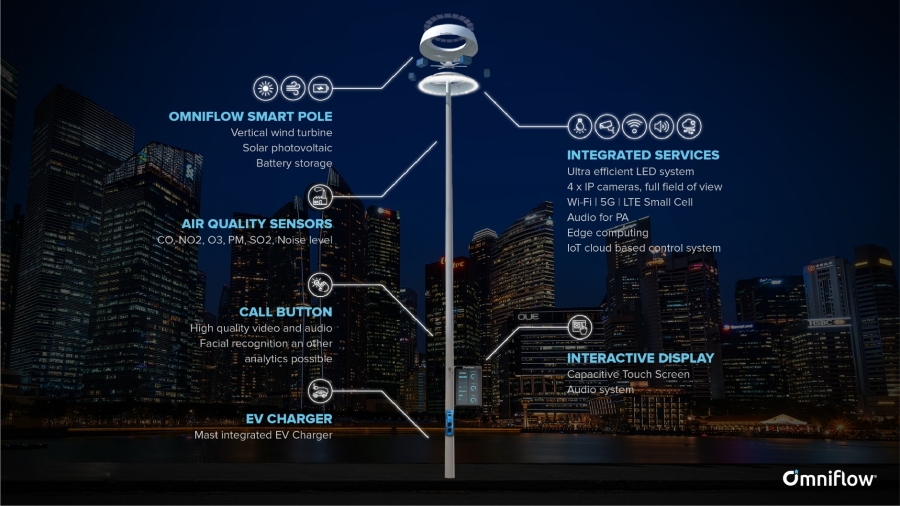 FlytBase is delighted to unite with Omniflow, an internet of things (IoT) startup that creates smart multifunctional infrastructure powered by a combination of wind and solar energy. Omniflow has integrated a drone charging hub with their product line, OMNILED, to establish scalable and sustainable networks and highways for drone service providers, leveraging FlytBase’s strong drone-automation software.

Evolution of the Smart Pole

One of the primary objectives of such modern technology is to optimize resource utilization. However, most public lighting systems today still run on 20-year-old technology that consumes power in a highly inefficient and unsustainable manner. It has been estimated that one streetlight is responsible for around 1.3 tons of annual CO2 emissions. Consequently, excess power consumption owing to outdated technology has long been a problem for its highly damaging effect on the environment, particularly in instances where the electricity is generated by burning fossil fuels.

To address these issues, Omniflow developed OMNILED, a multifunctional lighting solution that can turn any regular streetlight into a smart pole with ultra-efficient LEDs, IP cameras, high-quality PA systems, LTE/small-cell connectivity, public Wi-Fi, and off-the-grid operability with battery storage, among several other features, powered almost entirely through renewable energy and carbon-conscious technology. Their vision and business model are centered around realizing an eco-friendly world that digitizes existing infrastructure, avoiding the expensive and resource-intensive process of remanufacturing and deploying products with limited functionalities.

To enable drones to perform autonomous functions such as landing, take-off, and executing pre/post-flight checks, Omniflow collaborated with FlytBase to deploy a fully integrated software solution that would enable remote control of both the drone and the hub. FlytBase’s intuitive and modular software solution, FlytNow, can be used to plan and schedule repeatable missions and set failsafe actions that are automatically triggered during emergencies or incidents. One of the key features of the software is its precision-landing module, which uses computer-vision technology and landing algorithms to accurately align, approach, and land the drones on the charging pad every time